Who better than Wikipedia to tell you the story

Hamoir is essentially a rural commune. The valley of the Ourthe crossing the town from south to north contributes to its tourist development, mainly in Hamoir and Comblain-la-Tour ( SNCB stations, campsites, hotels, restaurants). Ourthe receives successively the Néblon in Hamoir, the Bloquay in Fairon and the Boé in Comblain-la-Tour. Hamoir also has a dairy products processing plant and many shops (mainly in the rue du Pont). The town is crossed by the National Route 66 which serves as a landmark.In Huy, we talk about the ""route de Hamoir"".

The town is part of the Regional Economic Grouping of the Ourthe, Vesdre and Amblève valleys ( GREOVA ) as well as of the tourist office ofCountry of Ourthe-Amblève.

The municipality of Hamoir is made up of three former municipalities and four villages:

It also has some hamlets

Description of the village

The village of Hamoir is mainly concentrated at the bottom of the valley of the Ourthe at the place of its confluence with the Néblonas well as on the western side of the hill, at an altitude of about 119 m at the bridge, 12 km upstream from the confluence of the Ourthe and the Amblève , 39 km from Liège and 24 from Huy . Located mainly in Famenne , the former municipality of Hamoir grouped together three ""entities"": Xhignesse on the right bank downstream, Hamoir-center, and Hamoir-Lassus upstream, also on the right bank.

Old houses on the banks of the Ourthe.

The parish: from Xhignesse to Hamoir

The constitution of parishes at the beginning of the medieval period is of an importance which goes beyond the religious character on which they are dependent. Indeed, with the transition from an urban society to a rural society, they structure the rural world and constitute a relay for the diffusion of the faith, of which the parish church constitutes the center of a materialized territory.Evangelized by Saint Remacle , the region of Hamoir keeps a lasting memory of its passage during the Middle Ages thanks to the pilgrimage of the fountains located in Filot. It is to him that we owe the will to establish parishes in our regions. Settlements attested by a diploma, in particular, from the King of the Franks Sigebert , a pious man, granting land to Saint Remacle for the establishment of a monastery.

The foundation of the former parish of Xhignesse is also closely linked to the abbey of Stavelot . A popular tradition has it that it is Plectrude , wife of Pépin de Herstal , who is at the origin of this foundation at the end of the 7th century.th century, as it was for the neighboring parish of Lierneux . This tradition is reflected in a disputed manuscript of a Laurenty, prior of the monastery of Malmedy , in a degree of the seventeenth century. Other sources indicate that a monastic community dependent Stavelot, moved to Xhignesse, and whose remains are the Romanesque church of the twelfth century that served as Abbey and was buried where the abbot of Stavelot St. Angelin. This thesis is supported by the discovery not far from the village center of a primitive church, the only remains are ground traces of ancient walls and columns, and a series of ancient tombs dating from e viii - ix centuries , destroyed by the Normans.

Nevertheless, Xhignesse as the spiritual capital of a vast territory extending between the parishes of Stavelot, Lierneux, Tohogne and Ocquier , is attested from the end of theseventh century. But from the twelfth century, the parish was dismembered by establishing new churches in nearby villages, as in Lognes or Ferrières. Finally, in the eighteenth century, it remains of the old parish Xhignesse the villages of Hamoir and Filot, Xhignesse, Lassus and Sy. But in 1737, the Notre-Dame de Lorette chapel was built in the center of Hamoir, and although the church of Xhignesse kept the monopoly of the Masses of the major festivals, this did not prevent the church from losing its rank of parish in 1803 for the benefit of Filot first and then Hamoir in 1842.

From an architectural point of view, the church of Xhignesse belongs to the Mosan style, but the Rhine influence is well felt. The building is built in limestone and sandstone, materials originating in the region. The plan is qualified as a basilica.The nave consists of a nave with three sections and aisles, and a transept, where, under the triumphal arch hangs a crucifix dated polychrome without certainty of the seventeenth century, which opens with the choir . We will specifically note the presence of a presbytery which precedes the apse, itself characteristic by the presence on the outside of a remarkable ornamentation of seven blind arcades surmounted by nine niches intended to lighten the vault. Some see in ""this architectural process the start of an evolution that will lead to dwarf or Rhine galleries. "

The church of Hamoir was built by the will of Jean Del Cour whose inheritance was intended for the construction of a chapel, called Notre-Dame de Lorette.It is thanks to the sale of a hundred or so paintings by the famous painter and sculptor that the construction of the church, which can still be seen today, began in 1869 on the site of the lost chapel, could be undertaken. Dedicated to the Blessed Virgin Mary, the church is said to be ""ogival style"". Inside there is the real portrait of Saint Luke by Jean Del Cour, as well as a tabernacle door carved by the same artist.

Jean Del Cour: a figure of Hamoir and the Liège landscape 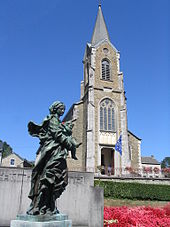 Copy of the Virgin and Child in front of the church.
The original is in Vinâve d'Île in Liège .

Jean Del Cour was born in 1631 in Hamoir, died in 1707 in Liège ,rue Sœurs-de-Hasque where his workshop was established, and buried in the now defunct church of Saint-Martin-en-Île . Inspired by his carpenter father, he was a much sought-after sculptor, proof that he enjoyed a certain reputation in his time. Many of his works can be found in churches in Liège or Belgium. Let us quote for example the series of statues of the Saint-Jacques church in Liège, in lime wood, a material for which he was past master, and painted to imitate marble, those of the church of the Friars Minor, the chapel of the Saint Sacrament of the Collegiate Church of St-MartinThe tomb of the 9th Bishop of Ghent in St. Bavo Cathedral , or the altar of the abbey church of Herckenrode today in the Church of Our Lady of Hasselt . But his best-known works from the Pays de Liège are undoubtedly The Virgin and Child which sits atop the Vinâve d'Île fountain, the Three Graces at the top of the Perron of Liège on the Place du Marché and the work that revealed, Christin bronze from the Pont des Arches, now kept in Saint Paul's Cathedral . After his death, his reputation did not decline, except in the Romantic period, more passionate about medieval times, and under the pen of some critics. His greatest admirers will see him meet Bernini during a trip to Rome - when he would have attended, in all likelihood, only his workshop or some of his collaborators from whom he would have been inspired - and Vauban who would have ordered him a statue of Louis XIV . Two monuments in his honor are worth mentioning: that of Saint Paul's Squarebuilt in 1911 and that of the Place Del Cour in Hamoir in 1927 where a bronze Virgin and Child sits enthroned.

Other personalities linked to Hamoir